Article by Joep Zander in "Justitiekrant", the official information magazine of the Dutch Department of Justice, published on 19-5-2000 (translated)


"There are always two truths". Since OrwellТs "1984", I have known of no institution which has been so economical with the truth as the Raad voor de Kinderbescherming. (Child Protection Agency, a Dutch government organisation)

However, this truth relativety is kept confined to the environment of their customers (parents with differences of opinion). When it concerns the public announcements of the Raad (Agency), there is, on balance, only one "truth", even when it conflicts with all scientific understanding in the rest of the world and is at variance with physical reality. 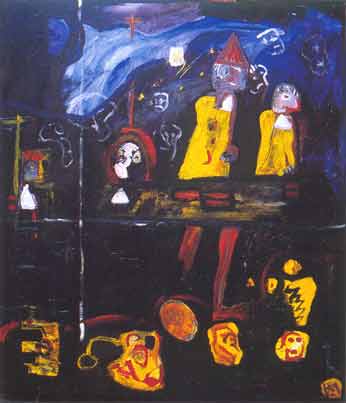 It is generally accepted that parents who adopt a mutually respected stance of both retaining responsibility and care for the children, will achieve the best results for the children. Netherlands as well as international research indicates that in 30-50% of cases after divorce (even more for unmarried parents) the children no longer see one of the parents (generally the father). Not only no responsibility and care, not even contact. In half the other cases the contact was regarded as insufficient to satisfy. It is therefore not true that in most cases satisfactory or sensible arrangements are made.

Despite many requests from parents to take a different stance, the RaadТs (AgencyТs) starting point is not the number of children with problems. Contrary to what their name implies, it is not the perspective of the child that counts as much as their own problem, i.e. legal procedures. In many cases where children do not see both their parents, no legal action is taken. Because of the disapproving attitude towards parents who do stand up for the rights of their children, the courage to go to court disappears. It is yet to be proved that it is bad for children when parents attack each other or the Raad in the courtroom, lodge complaints about the Raad or ring or fax the Raad (agency) too often.

This does not mean that really a lot more parents are bad and the Raad voor de Kinderbescherming (Child Protection Agency) has to get involved a lot more. To the contrary, parents must take more responsibility and the resulting agreements they make with each other must be respected to a greater extent. The Kinderbescherming (Child Protection Agency) and the judge must set a good example in this respect.

It angers that we in Holland get so worked up about access mediation and association which must all lead to arrangements, contracts or covenants which are then ignored on principle by every judge because the status quo (who has won the tug of war) always has more relevance.

What in fact stays hidden by this two-faced treatment of the truth is a serious failure in society, the impact of which is denied. This failure which, depending on the context, can be referred to as access injustice (legal system), loyalty-abuse (social - psychological),

or Parental Alienation Syndrome (the traumatic consequences) is of such a dimension that we all turn away from it. Our society dehumanizes parent-child relationships. The "interest of the child" has become a soulless argument for everyone who wants to add strength to his or her own self interest. And that applies not only to the parents, although they are specifically accused of doing this, but especially the institutions and their employees. " My good man, if I agree with you, my children wonТt have bread on the table" or suchlike. Institutions want to grow as shrinking is not in their nature.

Last summer, a number of parents from all over the world (fathers especially), drew up the "Declaration of Langeac on equal parenting" which locates the child protection and state justice agencies towards equal and full parenthood of fathers and mothers. Important factors in this connection are restoration of, and respect for civil contract possibilities for parents , no state involvement when there are no child abuse issues and restoration of the democratic responsibilities of the Trias politica, e.g. compliance by the judiciary with the constitutional requirement that judicial decisions be made publicly available (Article 121 of the Constitution)

A clear view of reality is a precondition for tackling social problems. This also applies to the problems caused by the degeneration of a part of the state apparatus. The modern child protection apparatus has many of the characteristics of Miniwa, the Orwellian ministry of truth distortion. This includes the manner in which children are made to share responsibility for a choice against one of their two parents.

Minjust, the Internet name of the ministry of justice is for that matter etymologically not far removed from Miniwa.

Joep Zander is a pedagogue, artist.