Help for men Article in NRC-handelsblad 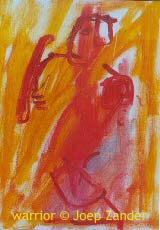 This is an article printed in the Dutch Newspaper the NRC Handelsblad May 10th  2003. Theo Richel is a journalist and Joep Zander is pedagogue. Both are members of the Dentank M/V in Holland.

For years people have almost exclusively looked at the problems of women when considering emancipation. According to Theo Richel and Joep Zander. It is about time to pay more attention to areas where men are left behind.

The start of the second feminist-wave, in the 1970s, the fight to erase the cause of women and men side-by-side was on the agenda. However, in the past few years the attention has mainly focused on the arrears of women. That work is far from finished yet, but its about time the problems of men are looked at as well. Men still have a lot of catching up to do. Here are some examples:

The lifespan of men on average is six (6) years shorter than women. They get sicker quicker and often suffer from cancer and coronary diseases. The suicide rate of men is twice to three times as high as that of women. The combined work/care pressure of men is according to the Emancipation monitor (Social Cultural Planning Bureau/ CBS) is higher than that for women.

There is a lot of pressure on men to take more care-tasks upon them, but they seem to enlarge their chances of divorce in doing that. According to the courts the attention given to his children by a father doesnt play any role or even a negative role when considering the wishes of the mother*.

Some fathers neglect their children after a divorce however this is only a small minority according to the research. Many fathers are being kept away from their children against their will. This detrimental for both the children and the father, neither can turn to any sort of support service.

Men are preferably portrayed as violence-junkies. This totally ignores the fact that the great majority of men are not violent, but just programmed to protect women and children, even if they take their own life.

There is no attention given to the male victims of domestic (physical) violence. Research shows that this group in size is comparable to that of women. Government organizes campaigns about men, without any input from the father/mens movement and obviously without any concern about the real figures about men.

Many people, when confronted with the above-mentioned problems of men, use arguments such as a mans lifestyle is much unhealthier or men are always more violent. If a man runs into trouble it is considered his own fault. When it concerns women however, such comments are unsuitable: after all who would dare to suggest that a woman who was raped wore a skirt that was much to short?

In many countries the reality of the problems of men are slowly starting to be recognized. Countries such as Finland, the U.S. as a whole and individual states, New Zealand, Germany, Belgium, Sweden, the U.K. and Ireland have many initiatives. These vary from a careful inventory of the problems to safe houses for male victims of domestic violence and a National Bureau for Mens Health (U.S.).

Leading the world seems to be Austria; its Ministry of Social Affairs has had a department of mens affairs since 2001. Although only staffed by six (6) employees the effect on their society is enormous. Amongst other things it initiated into male suicide and the effect of divorce on fathers and children, and it took the initiative to organize a congress about mens problems. In the first seven (7) months of its existence the department received 35,000 phone calls and this, according to an employee, trend has continued since then. These calls were mainly from divorced men who, against their wishes, were separated from their children. An analysis of these emergency calls is expected soon.

In Ireland a study concluded that, behind closed doors, women can be just as violent as men. Support for men is now organized in this country.

Some agencies in Holland also claim to support men, however in reality they confine themselves to telling male offenders of violence how bad they really are. In this country, men are perpetrators not victims. Some agencies lean to systematically saddle men with rigid character structures and point to these as the main causes for the problems of their male clients.  Men supposedly dont show enough feelings and the agencies are supposed to show them how to improve this. Men are judged on female criteria and thus the offer of support falls on deaf ears.

Research has shown that social services are not really interested in the heterosexual man.

The good news is that it isnt all bad news: A hospital in Nijmegen recently opened a clinic for men. Rumour has it this caused a stampede of patients.

The second feminist wave also created a mens movement. Strangely enough this didnt consist of men who aspired equality of men and women, but a bunch of funny wads, who seemed to be impregnated with the belief that they were socially, morally, sexually and emotionally inferior to women. Men had to be prepared that evolutionally and technological developments would make them redundant.

This vision is still propagated by many universities and organizations. Although the name suggests different, in the eyes of organizations as E-quality most families are only one parent families, run by mum of course. Maybe theres a bloke around somewhere but he doesnt play any important role.

In Holland (population approximately 16million) around 35,000 divorces take place each year. Contrary to what many people think, this isnt a case of the menopausal bloke falling for the younger woman. It happens, of course, but 75% of divorces are initiated by women and not because of affairs, violence or alcoholism.  According to Dutch researchers, women take this step because they put higher demands on quality in the relationship. What is not mentioned is that they can make these demands because, according to a U.S. study into 40,000 divorces, the person who is assured of having children initiates the divorce. Men swallow their demands for better relationship-quality, because if he initiates the divorce, he is just about guaranteed to loose the children.

No doubt that amongst those tens of thousands of men who are dumped this way are alcoholics, hitters, sexual deviates etc, but also many, many men who, prior to the divorce, passionately worked for their families. They suddenly discover that their marriage turned into a contract, in which justice sides with the person who wants to break that contract. Out of the blue they are considered a danger to their children.

Some of these men are indeed sad cases and spiral into depression and neglect. Others however, have dealt with the shame and have regained their self worth. They are not opposed to emancipation of women but arent subservient to feminism either. This new mens movement manifests itself clearly on the websites of two campaigns of the Ministry of Social Affairs Men are getting better, and so are women and Men take a leading role that had the intended effect: the intention of the first campaign was to gather ideas for a future emancipation policy. The concept recommendations now suggest a separate coordinator for mens affairs for the Ministry and that the policy regarding domestic violence has to be more balanced. Another effect was the Denktank, MV, a think-tank like group in which men and women discuss the place of men in the emancipation policy. For the first time in history the Ministry seems to be open for these ideas.

World wide the feminist-movement has reacted negatively to the initiatives of men to do something about catching up. The Austrian director of the department of mens affairs remembers that at the foundation of the department it was stated that such initiatives werent necessary while all the demands of women werent yet met. Apparently emancipation can only serve the cause of women. The name of the campaign Men are getting better, and so are women suggests that the Ministry of Social Affairs has progressed somewhat in their thinking. Now lets see what eventuates.

other english information on this site